Situated just 3 miles from the lovely seaside town of Dungarvan in the south east coast of Ireland. The property is cosy and is ideal for a getaway. It is just 300 yards from the beach, perfect for swimming or surfing and also for fishing. If you feel energetic enough you can walk or cycle into Dungarvan town on the cycling / walking paths only 200 yards from the cottage, or just meander along the track. Be careful this track will take you all the way into Waterford city!!!!. On the way you will pass through tunnels and across viaducts build in the mid 1800. See it all on the website [www.deisegreenway.com] A journey not to be missed. Yes you can stop and have coffee etc. on the way.

Dungarvan is a wonderful touring base for the sunny southeast with Cork only 1 hour ...

...away and Waterford 1/2 hour. Cahir and Clonmel just 3/4 hour away. Dungarvan has a variety of outdoor activities to choose from - golf, tennis, fishing, wind surfing, cinema and children's playgrounds.

The blue flag beach of Clonea is within walking distance and Waterford itself offers many other beaches and sandy coves along the Copper Coast.

There are many pubs and restaurants, everything from fast food to award winning cordon bleu cuisine in Dungarvan, Cappoquin, Ardmore and Youghal. 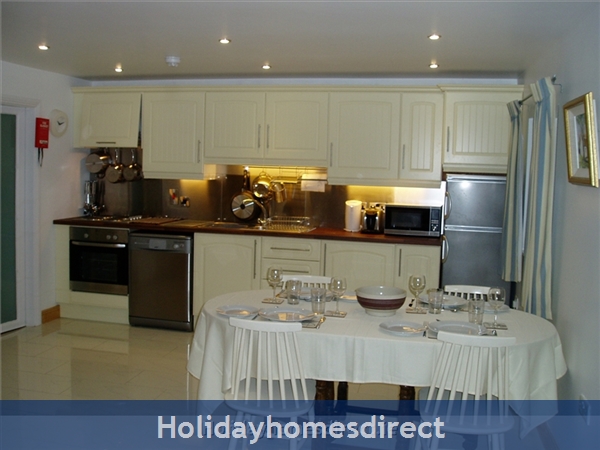 Duncannon Fort - A star-shaped fortress in Waterford HarbourVisit Lismore Town on the N72 just 20 minutes from the house to see its castle.

Lismore Castle has been the Irish home of the Dukes of Devonshire since 1753 and is possibly the most spectacular castle in Ireland. Situated in a panoramic position overlooking the Blackwater Valley it has views over rolling, wooded hills to the Knockmealdown Mountains beyond. Whilst being totally private, the Castle is on the outskirts of the Heritage Town of Lismore and a mere 200 yard walk to all its amenities.A visit to Ardmore - (Tidy Towns Award Winner) is a must with its Round Tower and scenic cliff walk.

Ardmore translates into Irish as Árd Mór, which means ‘Great Height’. It was to this part of the Waterford coast that St Declan was miraculously guided, on a return voyage from Wales some time during the 5th century. The beautiful Round Tower and Cathedral were built in the 12th century. The Tower’s entrance doorway is some 4 metres above ground level. The purpose of the Round Tower was to serve as a belfry and as a place of refuge for the ecclesiastics. Two Ogham stones are contained within the Cathedral for safety. One commemorates Lugaid, son or grandson of Nia-Segmon and the other is dedicated to AMADU (the loved one). The latter constitutes the longest known Ogham inscription in Ireland. The Beannachan, St. Declan’s Oratory, is said to contain the grave of St. Declan. The upper walls and roof were built in the 18th century. Generations of the faithful have scooped out the earth from the Saint’s grave, as it is believed to protect from disease.A short distance away is the Gaeltacht of "An Rinn", an Irish-speaking district of great scenic beauty, historical interest and charming countryside. Many Irish speaking children spend a period of their summer holidays there improving their spoken Irish.Just type in : Deise Greenway into Google and get all the information on this new greenway. See the wonderful pictures that will entice you to get onto it. It is a wonderful amenity for this area. You can travel form Dungarvan to Waterford on this Greenway. What an experience. Bike hire is available in Dungarvan and along the way.

From the heritage town of Lismore, to the seaside resort of Ardmore, the harbour at Dungarvan and on to the Geopark on the Copper Coast, West Waterford has some of the most beautiful scenery in Ireland.

The Comeragh Mountains range, with Mahon Falls is just a short drive away, is designated as an area of outstanding beauty, covered in unusual wild flowers and inhabited by flocks of mountain sheep and goats, fallow deer, and peregrine falcons. and is ideal for nature lovers and walkers with its beautiful waterfalls, woods and unspoilt lakes. Just bring a picnic and enjoy nature at its best.Also the Nire Valley is very popular for hill walking. A visit to Hanora's Cottage is a must.Colligan Wood nearby - ideal for a stroll.Extra Details...

Traditional music is played in the various pubs in the town of Dungarvan. Why not sit back and enjoy or even take part? The cottage is just 3/4 hour from local horse racing in the town of Tramore. Whatever your taste this wonderful cottage and outstanding area is sure to impress. You'll feel so at home, you won’t want to leave.

Fly to Dublin /Cork/Shannon/Waterford with Ryan Air, Aer Lingus or Aer Arann. Cork is the nearest . It is 1 hours drive away.

Car hire available at the airport and ferry ports

Take the M50 South. Follow signs to M7/N7. After approx 30 minutes take the M9 to Waterford and the N25 to Dungarvan

Take the N25 towards Waterford to Dungarvan. Take Dungarvan bypass - by keeping left at the first roundabout, go straight through the next 5 roundabouts. Garvey's Petrol/Diesel /Shop will now be on your left.. Take the next turn right [ road is marked to allow you get into right hand lane]. Follow road through the first roundabout to T junction. (Dungarvan Bay in front of you) Turn left at roundabout onto the R 675 and travel over the bridge. At the cross roads turn right following the directions to Gold Coast Hotel L3009.

Drive past the hotel to T junction approx 600yds. Turn right, down cul de sac. Thatched Cottage is on the left approx 600 yds.

No smoking in the cottage please.

Supplement for electricity and heating oil of €35.00 per week.

Cleaning service €30.00 per weekCottage is available at 4.00pm on day of arrival and to be vacated by 10.30 on day of departure.A deposit of 1/3 of the weekly charge will be required on booking.

Remainder to be paid 1 month before start of holiday.

A booking form will be sent you for this purpose.

Remainder to be paid on arrival.

A booking form will be sent ...

...you for this purpose.Payment Notes:We accept personal cheques or postal money orders in any recognised currency for purposes of payment. Since currency values fluctuate, we will deposit your cheque and apply the amount actually accrued to us on the day of deposit - minus transaction fees - to your credit.

The result is that your cheque that might have been worth 100% of the total on the day you sent it off might only be worth 97% (or better yet, 105%) when we deposit it. Whatever the amount, it will be applied to your account and you can settle up the balance when you arrive. Final settlement must be in Euro.Returnable deposit of €100.00 to cover breakages etc.payable on arrival.

Other holiday homes in Waterford