This beautiful villa offers excellent, spacious accommodation on two levels. On the ground floor, the lounge / dining room with air conditioning, has a large screen satellite television and DVD player, comfortable leather sofas, dining table and chairs and three sets of patio doors with beautiful views of the area and the sea. There is a separate fully fitted kitchen with breakfast table, oven and hob, dishwasher, fridge-freezer, microwave, coffee maker and washing machine. On this level there is a small twin bedroom, a cloakroom with WC and hand basin, a double bedroom with en-suite bathroom and another twin bedroom with en-suite bathroom. All rooms have air conditioning. There are stairs leading to the first floor where there are 2 double bedrooms with full en-suite bathrooms and air conditioning. Villa Silves is a highly desirable holiday villa to rent in an excellent location, close to all the amenities in ...

...Almancil, Vale do Lobo and Quinta do Lago. 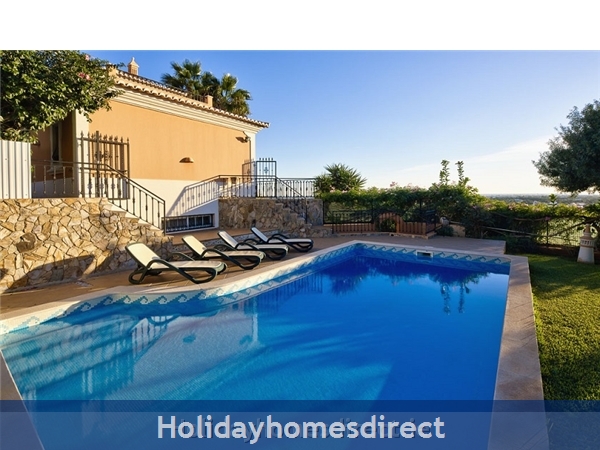 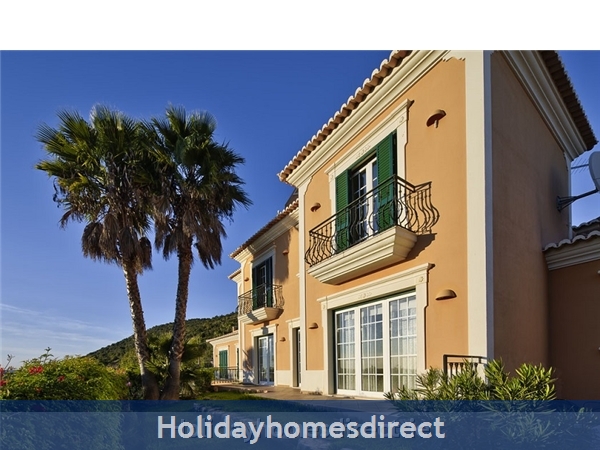 The Algarve Portugal, is one of Europe’s favourite holiday destinations and very popular with those looking for plenty of sunshine and the most beautiful and award winning sandy beaches in Europe. Families, couples, sports enthusiasts and those in love with nature will realise quite soon what makes the Algarve so popular to hundreds of thousands of Irish and UK holidaymakers, it’s excellent sandy beaches and guaranteed sun-drenched days, the relaxed and welcoming family atmosphere, the great choice of restaurants and lots of activities for all ages makes the Algarve the perfect location for your next holiday ,added to this the choice of golf courses and water sports spread across the Algarve makes it a year round destination. The Algarve boasts nearly 40 top quality golf courses with a selection for all level of players.

The Vale do Lobo Tennis Academy has 10 hard courts, 4 synthetic grass courts as well as a mini-tennis and paddle tennis court. One of the largest tennis facilities in Portugal, it attracts national and international tennis fixtures, including an annual ATP Seniors Tour competition, the Vale do Lobo Grand Champions Caixa Geral de Depósitos, and the Portuguese Ladies´ Open. A gym, swimming pool, pro shop and two restaurants overlooking the courts complete the facilities.The Tennis Academy´s team of professional coaches is led by Pedro Frazão, who was one of Portugal´s best tennis players and is now recognised as the country´s top coach, with European and American coaching certificates. He is also a Director of the European Professional Tennis Association. The Tennis Academy runs a busy year-round programme of individual and group coaching, tournaments and social events, for members and holidaymakers.Almancil Karting is a space for leisure and competition that is available to all interested in motor sport. Open all year, the circuit, which was inaugurated by Ayrton Senna, is 760 metres in length, 7,5 m in width, and is a replica of the former Formula 1 circuit in Brazil Jacarepaguá, the park receives over 295,000 visitors annually. The leisure complex located in Almancil near IP1, EN125, near Faro International Airport and 5 minutes away from Quinta do Lago and Vale do Lobo beaches.It is the ideal place to spend time with your family, friends or colleagues. The park is recognized by the DGT (General Direction of Tourism) and has the Certificate of Quality & Image from the AEA (Association of Business in Almancil). The circuit is approved by FPAK (Portuguese Federation of Automobile and Karting) and has 2 Honorable Mentions of Business Excellence in 2004 and 2006 by the AEA.This Roman church, added to in the Baroque period is covered with azulejos dating from 1730. The azulejos were designed by Bernardo, an artist known by the name of Policarpo de Oliveira Bernardes. Those on the walls and vault depict scenes from St Lawrence's life and his martyrdom... The large panel of azulejos on the church's flat chevet shows St Lawrence under a Baroque scallop.

Note: All prices based on 7 nights accommodation, per villa per weekall rates are from