Villa Sunrise is a truly sumptuous villa is set in a privileged location into Zone 9 In Dunas Douradas, high up, giving way to lovely views of the surrounding area taking advantage of it´s proximity to the beach, within easy walking distance.The Villa: In the grounds of the villa are interesting nooks and crannies, peaceful seating areas and beautiful flora. The villa itself is decorated in a combination of a modern Scandinavian feel with traditional Portuguese, very welcoming and warm style. A villa that leaves nothing to be desired, suitable for holidaymakers with families or adults looking for a peaceful getaway.First Floor: This is a 4 bedroom property from which 3 bedrooms are en suite and there is also a gym room with shower room on the basement. On the upper floor there are two double bedrooms with big window doors, leading to large balconies where you can enjoy ...

...the sun, facing the garden and the pool area with amazing view over Dunas Douradas. Both bedrooms are airy and with abundance of natural light, also the minimalist decoration, all together gives a warm, home sweet home feelingGround Floor: On the ground floor both twin bedrooms are facing the patio and the pool area also, with large window doors. The kitchen is large and open, fully equipped with all the necessary modern equipment. Next to it, the dining area is bright and airy and the living area cosy and intimateExterior: The outdoor space is just one of a kind. Private pool. lovely garden, large patio, chill out area with outdoor furniture, sofas, eating area and chairs, BBQ and food preparation area and sun loungers. 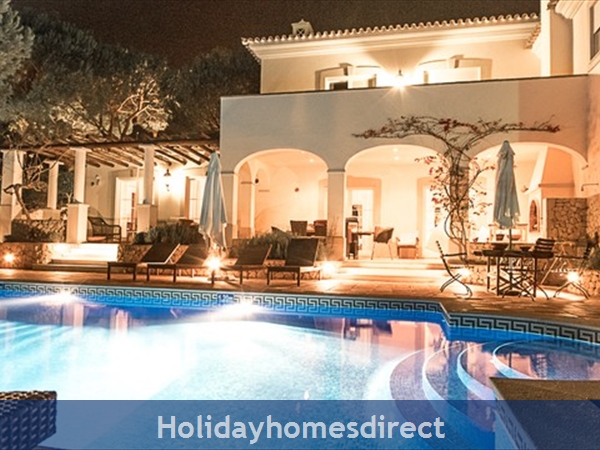 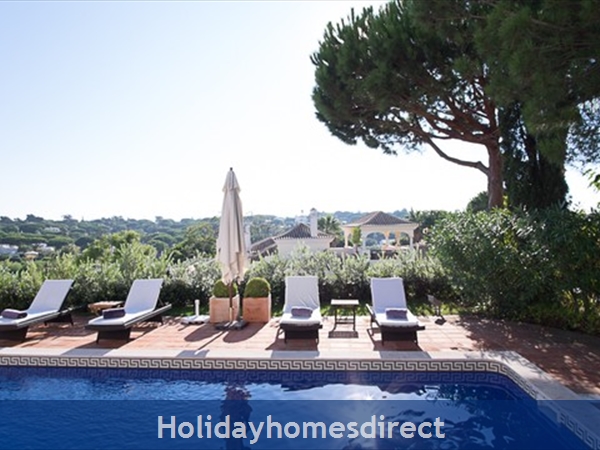 The Algarve Portugal, is one of Europe’s favourite holiday destinations and very popular with those looking for plenty of sunshine and the most beautiful and award winning sandy beaches in Europe. Families, couples, sports enthusiasts and those in love with nature will realise quite soon what makes the Algarve so popular to hundreds of thousands of Irish and UK holidaymakers, it’s excellent sandy beaches and guaranteed sun-drenched days, the relaxed and welcoming family atmosphere, the great choice of restaurants and lots of activities for all ages makes the Algarve the perfect location for your next holiday ,added to this the choice of golf courses and water sports spread across the Algarve makes it a year round destination. The Algarve boasts nearly 40 top quality golf courses with a selection for all level of players

Dunas Douradas is located between the popular towns of Vale do Lobo and Quinta Do Lago. Fashionable boutiques, elegant furniture and cultivated gastronomy. If you are looking for something special, go and see Quinta Shopping. Located directly at the entry of Quinta do Lago, this elegant shopping mall boasts: -fashionable boutiques -luxurious interior shops -excellent Chinese and Italian restaurants -real estate agencies specialised on top properties -an English pub, and many other shops and gastronomic facilities. Next to Quinta Shopping at Bougainvillea Plaza you also find most items for your daily needs, e.g. super markets, a bank, a newsstand, etc.The Vale do Lobo Tennis Academy has 10 hard courts, 4 synthetic grass courts as well as a mini-tennis and paddle tennis court. One of the largest tennis facilities in Portugal, it attracts national and international tennis fixtures, including an annual ATP Seniors Tour competition, the Vale do Lobo Grand Champions Caixa Geral de Depósitos, and the Portuguese Ladies´ Open. A gym, swimming pool, pro shop and two restaurants overlooking the courts complete the facilities.The Tennis Academy´s team of professional coaches is led by Pedro Frazão, who was one of Portugal´s best tennis players and is now recognised as the country´s top coach, with European and American coaching certificates. He is also a Director of the European Professional Tennis Association. The Tennis Academy runs a busy year-round programme of individual and group coaching, tournaments and social events, for members and holidaymakers.The Ria Formosa Natural Park is one of the most amazing places in the Algarve, not only for its variety of landscapes but also because of its unique location. Recently elected as one of the 7 Natural Wonders of Portugal, this is one of three protected areas not to be missed during your holiday in the Algarve. This is a unique coastal lagoon which is constantly changing due to the continuous movement of winds, currents and tides. Classified as a Natural Park in 1987, the Ria Formosa encompasses an area of about 18 000 hectares, and is protected from the sea by 5 barrier-islands and 2 peninsulas: the Peninsula of Ancão that the locals call island of Faro, the Barreta Island also known as Ilha Deserta, the Culatra Island (where the lighthouse of Santa Maria is located), the Island of Armona, the Island of Tavira, Cabanas Island and finally the Peninsula of Cacela.This awesome area extends along the leeward coast of the Algarve through the municipalities of Loulé, Faro, Olhão, Tavira and Vila Real de Santo António. Due to these natural features and its geographical location it was included in the list of wetlands of world-wide interest defined by the Ramsar Convention. In this protected area you may witness many different habitats such as barrier-islands, marshes, tidal flats, islets, dunes, salt pans, fresh water lagoons, agricultural areas and woodlands which hold a an impressive diversity of flora and fauna.There are three golf courses in total within the overall plan of Quinta do Lago - namely Quinta do Lago North & South, and San Lorenzo. The two Quinta do Lago courses form the golfing options of the playing members of the Club. Both courses are characterised as parkland courses wending their way through the Mediterranean pines that line the fairways, and offering tantalising views of the large houses and plots that make up the resort. The South course, designed by William Mitchell, is the championship course and has been host to the Portuguese Open on seven different occasions.The first nine holes wind through parkland, and the back nine loops around the lake from which the resort gets its name. The North course, nine holes designed by William Mitchell and nine holes designed by Rocky Roquemore. though not so famous as its southerly neighbor, is equally enjoyed by members. The third course, San Lorenzo, is situated on the coast in the South Eastern most part of Quinta do Lago and does not form part of the golfing rights of CGQL members. There is another course, associated with the Quinta do Lago complex which opened in October 2008 called Laranjal. This course is situated approximately 2 km east of Quinta do Lago in the Ludo valley.

Note: All prices are per villa, per weekplease enquire for rates

Prices may be subject to change at the owner's discretion.

vilar do golf, quinta do lago