This Villa is set back from the main road that runs along the beach front of Puerto del Carmen. It is situated close to all amenities but very private and secluded. Only a 3 minute walk from the long stretches of beaches Los Pocillos area of Puerto Del Carmen. Puerto del Carmen stretches from Matagorda to Old Town Harbour, with spectacular sea views, fabulous shops and exceptional restaurants/bars. VILLA FACILITIES: The interior of Villa has been finished to an excellent standard, with tasteful decor and spacious surroundings. FREE WIFI The villa has a large private terrace and garden area, off road parking and private heated swimming pool. FREE WIFI AVAILABLE Each room has been painted with a different colour and warm atmosphere. All furnishings are of a high standard: this includes fully fitted modern kitchen (coffee machine), luxurious leather seating in living area. On entering the Villa from the front door you arrive in ...

...the living area, this spacious and bright room has leather sofa’s with full entertaining system inc DVD Player/Video Player, INTERNET TV over 300 channels. Steps from living area up to the separate dining area is great for entertaining or time out for the adults, has large round glass table with chairs and fantastic lighting. To the left there is the fully fitted kitchen which has Full oven and large hob, extractor fan, toaster, kettle, dishwasher. There is a separate laundry with a washing machine. There is also a water filter system installed so you can drink safely from the tap. From living area there are steps leading to the right, this comfortable Master bedroom (south facing) with large fitted wardrobes (safe situated in this wardrobe) with bedside tables. Straight in front is the separate Bathroom consists of Glass shower surround, WC and wash basin. To the left of the stairs, you enter another beautifully decorated twin bedroom with large fitted wardrobes and side tables. Door leading to En-suite bathroom with fitted bath & shower, w.c, wash basin & cupboard. Coin opeated Airconditioning in all bedrooms. 3rd double bedroom has king size bed with en suite bathroom walk in shower cubicle, w.c & basin located in rear of villa away from other bedrooms for extra privacy. 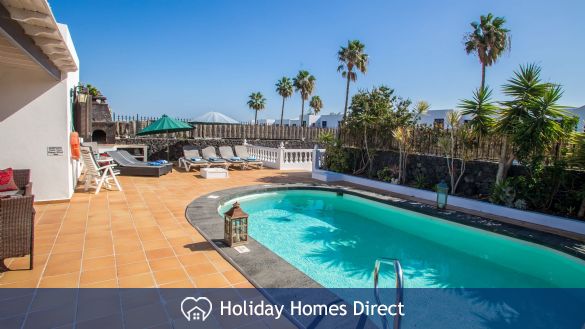 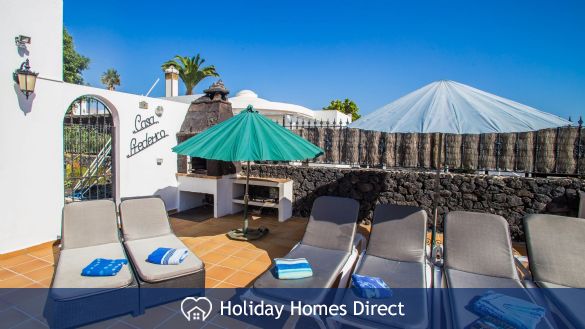 Lanzarote is a great sun destination all year round. Closer to Africa than Spain ; drier than parts of the Sahara, ecologically friendly, and a visitors delight. These are just some of the assets of Lanzarote, the archipelago's most easterly island. Another title, Land of 100 Volcanoes, understates the influence nature has had in sculpting this fascinating island. There are actually 300 volcanoes, some still bubbling quietly, some snuffed out. The largest and most visible, Fire Mountain, lies at the heart of the island. Its historical fury, though terrifying at the time of its major eruption back in 1730, has left a legacy of landscapes sublimely tinted red and shadowed by eerie basalt formations.Lanzarote has over 80 beaches, where you will find turquoise clear waters, wide sandy beaches, popular with families, naturists, windsurfers, and divers. Some of the island's beaches are covered with black volcanic sand but many are clothed in the golden glory of the nearby Sahara . This geographical proximity to Africa is often overlooked by visitors dining on Spanish-style tapas, paella and creative Canarian cuisine at the island's vast array of excellent restaurants. The capital, Arrecife, has more than its fair share of quality dining venues, many affording quayside views of dusk horizons you'd swear had been painted by hand. For dinner with a difference, the volcano-fuelled barbecue at El Diablo restaurant at the top of Timanfaya National Park is hard to beat. Fish and meat are cooked utilising 300°C of heat emanating from deep within the volcano. You'll be pleased to hear it's not quite that warm up on top.
Average daytime temperatures loiter around the 20°C mark in Winter and rain is rarely part of the vocabulary used by Lanzaroteños. In fact, the island receives less rainfall than parts of the Sahara desert, falling on an average of only 16 days per year, usually between December and February.
Most of the 65,000 inhabitants of this island live on the south-facing coasts, half of them in the capital. Arrecife hasn't always been the seat of local power. Before 1852, Teguise held the mantle of island control. This small town (barely a village) is still regarded by some locals as the 'real' capital, to them Arrecife is merely the main harbour.
Costa Teguise was developed within the municipality to cater for the influx of visitors keen to share a lifestyle vision of white alleyways, piercing blue skies and transparent waters.
Equally popular with visitors is Puerto del Carmen, Lanzarote's main resort area.
Playa Blanca is the island's other coastal centre of appeal, and the most southern. From the sandy beach you can look across the narrow channel to the neighbouring island of Fuerteventura just 11 kilometres away.
However, the combined attractions of Lanzarote, both man-made and natural, may make you decide to put off leaving the island till another time, even if it is just for a daytrip.

Puerto del Carmen, 10 minutes from the airport, and situated in the south central part of the island, is the principal tourist zone on Lanzarote. From a small seaside village dedicated to fishing, it has been transformed into one of the most popular tourist zones.

Long beaches of calm and clear waters, rest, relax, mild climate, leisure, fun...What more can you ask for from your holidays. We are waiting for you!

Daily flights from Ireland and UK.

A deposit of 50% would be required on booking and the balance 8 weeks before arrival. Prices are based on 4 sharing. Additional guests are charged at €20 pppn. Checkin 3pm. Checkout 10am unless otherwise arranged. Thermostatically controlled pool heating to 28/29 deg is provided throughout the year.

Suitable types of Holiday Puerto del Carmen Exterior Details
There are six loungers around the pool together with six chairs around the outdoor dining table. There are also two very comfortable sofas located under the pergola. A secure gate provides total privacy from the outside world. The pool is deep therefore it is essential that arm bands are put on small children first thing in the morning to avoid any accidents. There is a rail to assist you into the pool. If you are trying to accommodate a large group I could arrange the rent of a similar villa located 2 doors away called villa Saoirse or another villa close by on Calle Andorra.
Interior Details Bedrooms / Bathrooms Seating
Rental PricesPrices based on a 7 night rental
20 Dec - 8 Jan ‘22
€2,000
8 Jan - 30 June
€1,600
1 July - 31 Aug
€2,000
1 Sept - 27 Nov
€1,600
27 Nov - 20 Dec
€1,400
20 Dec - 8 Jan ‘23
€2,000

Note: Prices based on 4 sharing. Additional guests charged at €20 pppn.
No charge for cots and high chairs.