Casa Santos, is a beautiful villa situated in a quite residential area with beautiful hill views and it is spacious, comfortable and well equipped.

Balconies/terraces situated throughout the villa with pleasant views. Amongst its many qualities, the villa offers a large patio with B.Q. over looking the pool as well as satellite TV in the comfort of its living/ dining .

• 2 bedrooms: one twin , one double; bath room with shower over bath; bidet and toilet

• Terrace, with furniture and sun loungers. 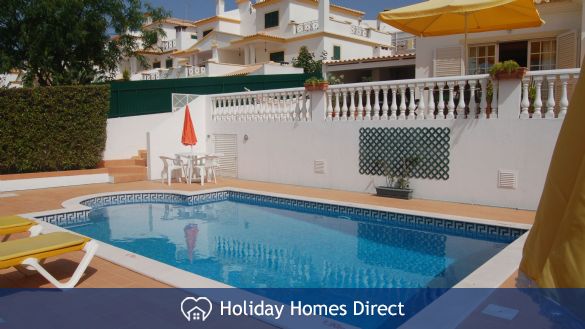 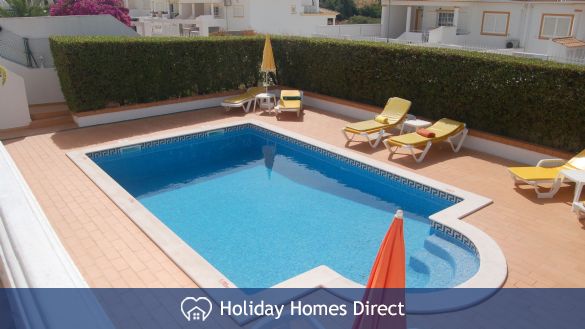 and municipal area of Albufeira come under the jurisdiction of the district of Faro in the province called the Algarve, on the south coast of Portugal. It covers an area of approximately 140 km² with more than 30.000 resident inhabitants. We invite you to know a little of its history, its monuments, its churches, its people and their local customs.

The place we know today as Albufeira is not just a “Tourist Capital” in Portugal. It is also an area full of history, with vestiges of human occupation since the remote Neolithic and Bronze ages.

Contacts with Phoenicians, Greeks and Carthaginians taught the inhabitants the alphabet, use of monetary currency, and how to conserve foodstuffs with use of salt. Initially occupied by the Romans, its original name was Baltum. The Romans were famous for their administrative skills and initiated intense agricultural, mining and commercial activities. There still remain vestiges of aqueducts, roads and bridges built by them.

Commerce with the North African coast led to a gradual influx of the Moors throughout the Algarve. The name of Albufeira comes from the Arab “Al-Buhera” which means “Castle of the Sea” – this name could derive from the existence of a fortification built on the rocky outcrop that dominated the lagoon on the lower part of the town. The Arabs made great strides in the development of agriculture, introducing new cultivations, tools and techniques, such as ploughs, water wheels to raise water from underground wells and also were the first to use fertilizers.

The Christian conquest of the region began at the end of the 12th Century. After decades of conflict, a tight siege of the town by the Knights of the Order of Santiago, finally drove out the Moors in 1249, in the reign of King D. Afonso III. The town was awarded to the Military Order of Aviz and became part of the kingdom of Portugal and the Algarves. King D. Manuel I awarded Charter to the Town of Albufeira on the 20th of August 1504 (date of the municipal holiday) and from that day the town was governed according to the legislation in force for the rest of the country.

Of all the southern towns, Albufeira has been one of the most victimised by natural disasters. The earthquake of 1755 was the worst and most damaging, terminating in a tidal flood that destroyed most of the buildings, leaving few houses standing intact. Rebuilding was slow and it took decades for Albufeira to begin to recuperate from this enormous tragedy.

In the middle of the 19th Century, the fishing industry did much to revive the economy of the town. The export of fish and dried fruit were the principal means of income for the region.

Tourism began to flourish from the 1960’s and gave a breath of fresh air to the local economy. As Albufeira grew, so it became a “city” in 1986 and continues to evolve and expand even into the present day. Thanks to an ever-growing tourist industry, it has become one of the most desired holiday destinations in Europe.

In order to cope with the growing needs of the Tourist industry, Albufeira was obliged to overflow its historical urban boundaries into the surrounding countryside in order to build the necessary quality accommodation and install the accompanying luxury services they require. Montechoro, Areias de São João and the famous Oura now became new centres of attraction for visitors. The recent completion of the Albufeira Marina has extended the town’s urban development from its eastern side over to Galé and Salgados in the west.

The borough of Albufeira receives a considerable percentage of the 5 million tourists who visit the Algarve annually. The frenetic summer season now extends into the rest of the year, for visitors of all ages and from all over the world.

Its extraordinary climate, with more than 3000 hours of sunshine per year, (see the weather page) and the friendly charm of its people persuade many foreigners to move residence to the region, either temporarily or permanently. We find more and more people select Albufeira as their favourite destination because of its multiple attractions, i.e. the lively and social nightlife, the beautiful beaches, varied water sports, golf courses, glorious countryside and the local cuisine.

Albufeira stages a wide range of cultural, celebrative, sportive and entertaining events. These actions provide moments of leisure as much as for inhabitants as for visitors and are a mark of life in the county and a proof of cultural identity conservation from its people.

Caliços Market 1st and 3rd Tuesday of the month

Festival in honour of Our Lady of Guia

"Colors & Shapes of our Artists" every 2 years

DEPOSIT ON BOOKING ( REQUESTED ONLY AFTER CHRISTMAS)

BALANCE ON ARRIVAL IN CASH.

PRIVATE POOL FOR THE SOLO USE OF GUESTS

LAST MINT OUT OF PEACK SEASON AND HOLIDAYS AND DEPENDING ON NO. OF

OUT OF HIGH SEASON DAY START IS FEXIBLE