This is a luxurious apartment in Marbella, with two full size pools and gardens opening onto the promenade and the beach. Surrounded by restaurants, bars and shops this is the ideal holiday apartment for the discerning traveller. Children over 12 years only please.Fantastic views from this wonderful third floor, south facing apartment with a main terrace overlooking Marbella marina and to the south down to Puerto Banus and beyond. Enjoy the spectacular sunsets! The SECOND Terrace is off the twin bedroom and overlooks the lovely gardens with its two large pools.Newly renovated and modernised this is a very well presented apartment, we hope we have provided everything you will need, but please do let us know if you have any special requirements, we will do our best to oblige you. We provide linen and towels INCLUDING BEACH TOWELS. Fully equipped ...

...so just come and enjoy the fabulous Marbella life......lazy sunny days, evenings spent shopping before dinner in Puerto Banus amongst the yachts and casinos. This is one of the most sought after locations, on the beach front yet within a stroll of the Old Town, Orange Square etc. In a quiet area with a park and a selection of wonderful restaurants and friendly bars you will be spoilt for choice! As owners we have been delighted that in the two years we have been letting this apartment our guests have enjoyed staying here so much that over 90% have returned.... some more than 10 times !!We hope you will enjoy it too................. 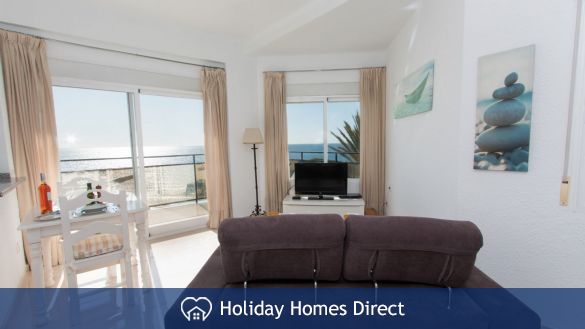 The Costa del Sol is a region in the south of Spain, in the autonomous community of Andalusia, comprising the coastal towns and communities along the Mediterranean coastline of the Málaga province and the eastern edge of the Cádiz province. The name translates as "Sunny Coast" [1] in English. Formerly made up only of a series of small, quiet fishing settlements, the region has been completely transformed during the latter part of the 20th century into a tourist destination of world renown, with a near-continuous urban agglomeration of high-rise settlements and resorts running along the length of the coastline.It includes the city of Málaga,and the towns of Torremolinos, Benalmádena, Fuengirola, Mijas, Marbella, Puerto Banús, San Pedro de Alcántara, Vélez-Málaga, Nerja, Torrox, Estepona, San Luis de Sabinillas, the community of Sotogrande, San Roque and La Línea de la Concepción.Settlement in the region dates back to the Bronze Age, and it has been colonised and ruled by many cultures such as the Phoenicians, Carthaginians, Romans, Vandals, Visigoths and Moors, before the Reconquista.Historically its population lived in the fishing villages, and in the "white" villages a little distance inland, in the mountains running down to the coast. The area was discovered and developed to meet the demands of international tourism in the 1950s and has since been a popular destination for foreign tourists not only for its beaches but also for its local culture. The area is particularly famous for its towns like Marbella, which provides the Costa del Sol with its reputation for being a playground for its super-rich and famous visitors.In recent years the Costa Del Sol has become known to golf enthusiasts as the 'Costa Del Golf' due to the number of high quality golf courses, more than fifty, of which many are centred around Marbella. Attracting golfers from all over Europe and the rest of the world, the Costa del Sol has benefitted from the stimulation provided by this sport to growth in tourism and to the resulting increase in development of new complexes to house the number of golfers visiting the area.

Marbella's motto is "A Way of Life" and, certainly, this luxurious resort town seems to have it all and is, once again, rising to the fore as a favourite location with the rich and famous, as well as more ordinary folk who are willing to pay just a little bit extra for southern Spain's answer to St Tropez. Not too long ago, Marbella sharpened its image still more thanks to a considerable investment initiated by the town's colourful and controversial late mayor, Jesus Gil which resulted in a massive landscaping drive. But Marbella has a down to earth side as well, an air of individuality which can be best appreciated by exploring back streets in the old part of town. One of the prettiest places is the fabled 'Orange Square' which is located just off the main street in the older district and is also home to the 16th century town hall and tourist office where you can pick up a detailed map and visitor informationBack to Orange Square, or "La Plaza de los Naranjos", as it is called in Spanish, expect to meet with stately buildings, small shops, art galleries, bars and bistros and is a hub of activity day and night. And, depending on the time of year, the colours here can be vibrant, with the trees and exotic tropical plants set against a backdrop of dazzling white buildings and a deep blue sky. Be sure to explore the honeycomb of surrounding narrow streets where homes and shops intermingle to create the atmosphere of a small village, rather than a cosmopolitan town. There are numerous excellent restaurants to choose from, ranging from those specialising in the predictably pricey exclusive cordon bleu to the gritty individuality of a backstreet Spanish bar where the Serrano ham is gently cured by tobacco smoke and the tapas are both tasty and filling.

Note: Please note that we are private owners with a small portfolio of select properties in Mojacar and Marbella Spain and Dublin.

... ONLY SATURDAY TO SATURDAY bookings can be accepted.All our properties are Registered with and Approved by the relevant official Tourist Boards.

Guest satisfacion is of paramount importance to us and our large number of repeat bookings are due to our ongoing investment and commitment to providing extremely well presented, thouroughly clean, well equipped properties.

To reserve the apartment we require a deposit of just 50% of the rental , the balance is not then due until 6 weeks prior to your arrival date. Payments can be by Cheque or Bank transfer we accept Mastercard and Visa Credit Cards so whichever is most convenient for you.ALL UTILITIES , VAT, TAXES, FREE WIFI, BEDLINENS AND TOWELS INCLUDING BEACH TOWELS, SKY TV ARE ALL INCLUDED

Rates quoted are per week but we are happy to offer a discount for over 3 weeks.

Please note We request a seperate payment of €200.00 Accidental Damage Deposit which will only be used in the event of actual damage or excessive cleaning being necessary. We are pleased to say such action has not been necessary in the last 10 years!Please note the apartment will be available for occupation after 3pm on day of arrival and must be vacated by 11am unless by specific arrangement

Please note there is a €65 surcharge for Bank Holiday Weekends